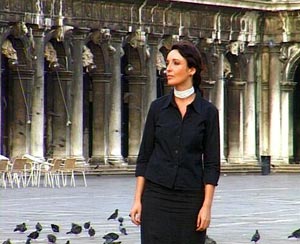 The Garden of Earthly Delights

Lech Majewski’s latest film is an adaptation of his own novel “Metafizyka”. The main characters are Luis – a ship engineer and a loner living in the world of symmetry and arithmetic – and Bea – an Italian fascinated by Hieronymus Bosch’s paintings and Middle-age alchemy. Both of them look for their place in the world and on a number of ways try to find and speak out the truth about their lives. Luis records every moment they spend together and Bea attempts to sort out the clues hidden in Bosch’s painting “The Garden of Earthly Delights” leading to an earthly paradise. Similarly to the novel, all the events take place in Venice and London. The only change involves the names of the main characters – now it’s Claudia and Chris, just like the actors. The director wanted them to be even closer to the characters they play. In order to achieve this, also a film crew was reduced to the absolute minimum with the actors themselves shooting each other in many scenes. “I wanted to introduce a strong element of intimacy that I’ve never seen before in a so called ‘normal’ cinema”, said Lech Majewski.

Based on the promotional materials.