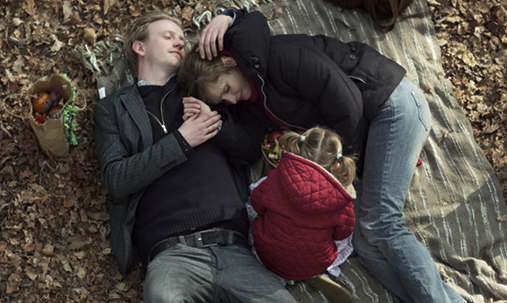 A young couple who, at first glance, appear happy. She finds fulfillment as a mother, teaching little Clara how the world works. Her smiling husband is a police officer. Behind closed doors, however, the reality of their home life is not so colorful. Feeling defeated as a result of his unspoken and unfulfilled aspirations, he begins to beat his wife. Soon, the only colorful thing left in their life together are her bruises. Divided by aggression, their compulsive love – for each other and for their child – keeps them together. Philip Gröning has made a film with incredible emotional power. Fully aware of this, he dresses his film up in a formal manner, dividing it into sections of varying lengths, sometimes lasting several minutes, sometimes mere seconds. Black, numbered frames soften the blow a little by giving the audience the back-story. The Police Officer’s Wife is a film that it is difficult to relate to. While painful, however, finding a way to relate to it might just change your life.