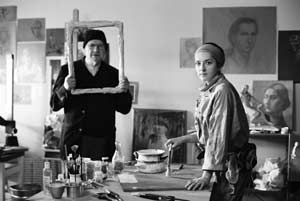 After three years in prison, Cuma – an art theft expert – is released on parole due to his ‘poor health’. Gruby, a fence who got him released, commissions Cuma to steal Leonardo da Vinci’s “Lady with an Ermine” and immediately gathers the crew. He pays a visit to his old friend Julian, a specialist in explosives, to make him an offer. Though Julian is completely rehabilitated and works in the police as an expert, he has a debt of gratitude and agrees to take part in the robbery, at the same time doing everything to stop it. He asks an old forger Hagen to make a copy of the painting. When the man refuses to help, Julian turns to Magda, a young and talented student of Monument Conservation. Commissioner Wilk finds out that Cuma walks free. In four months, the original paining returns from Japanese exhibition. Wilk suspects that Cuma’s release is not a pure coincidence.