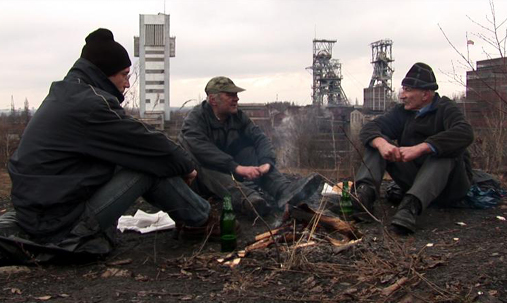 The film “Weavers” is based on a drama by the German Nobel prizewinner Gerhart Hauptmann, written in 1892. A play of the same title describes weavers’ uprising in the Sowie mountains in 1844. Molska transferred the story of the proletariat rebellion to the contemporary reality, preserving fragments of dialogues, the choir and the expanded stage directions. A group of unemployed miners, sitting in front of a Silesia mine, complain about the prevailing exploitation with the words of Hauptmann’s drama. The scene is accompanied by recordings of everyday coal mine work and the sound of a weaver song encouraging rebellion. The song, sang in the new reality, loses its revolutionary overtone. With this, Molska asks the question of the topicality of the left-wing rhetorics, both of the 19. century and that related to the Solidarity movement of the 1980s.