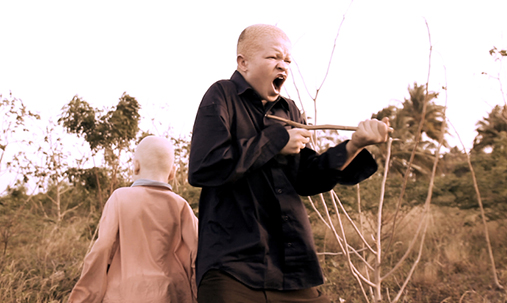 In Tanzania, Kenya and Congo albinos are considered a lucrative commodity and shamans pay fortunes for these Africans’ body parts and organs believing that amulets they fashion from their whitened bodies bring luck and prosperity. Alias is a young albino from a Tanzanian village sent by his mother to the city to find protection after witnessing the brutal murder of his albino father. After finding shelter with his uncle, he quickly becomes disenchanted with street life and moves to a hut on the city outskirts inhabited by a group of albino children. There, he learns there is no way to escape from his genetic heritage and only acceptance offers physical and spiritual balance. The director eschews using a single style – some scenes are shot with raw documentary precision while others shimmer with impressionistic tones while a dynamically roving camera, unexpected retrospections and unsettling voices seeping in from outside the frame heighten viewer anxiety.