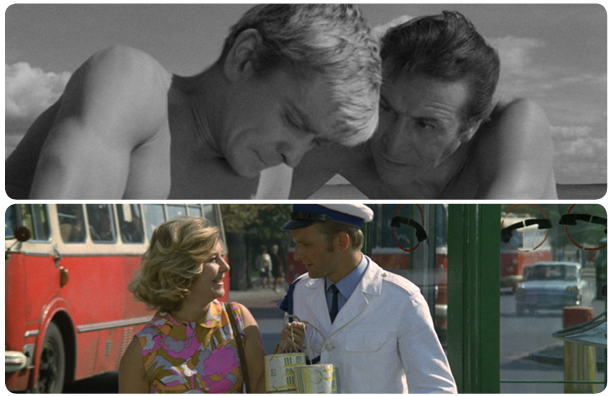 The 40th Gdynia Film Festival together with the Digital Film Repository invite to a number of events related to the renewed Polish feature films. As the Artistic Director of the Festival, Michał Oleszczyk, says, “We are doing our best to revive the Polish cinema classics in Gdynia in a number of ways”.

Since 2010, the Digital Film Repository has taken part in the digital reconstruction of over 160 Polish feature, documentary and animated films, supervising the processes of their reconstruction and then securing and distributing digital copies of the films reconstructed. During the Festival, we will watch as many as 11 of them. The partners of the screenings are the copyright owners, Studio Filmowe “Kadr”, “Tor” and “Zebra”.

One of the most important events of the Festival will be an official screening of a film by the Prizewinner of the Platinum Lions, Tadeusz Chmielewski. On Thursday, 17th September 2015, at 6.30 p.m., in the recently opened Gdynia Film Centre, the viewers will watch one of the most popular comedies of the master, “I Hate Mondays” in a new digital version. The screening, prepared in cooperation with and under the patronage of PKO Bank Polski, will be accompanied by a meeting with the prizewinner and other makers of this film (an invitation-only event).

“I Hate Mondays” is one of the best Polish comedies of errors, showing – with a pinch of salt – the absurd of the early Gierek era. A set of plots that are loosely related to the story on the one hand allows for drafting a portrait of a certain community, and on the other hand, it shapes up into a unique declaration of love, a hymn to Warsaw, the city which its inhabitants love despite all the problems their daily life brings.

Tadeusz Chmielewski recollects unusual circumstances of the creation of the film in the “ Plus Minus” addition to “Rzeczpospolita”, in Barbara Holender’s article (14th August 2015). “I didn’t want to do anything,” Chmielewski recollects. “But there we are, sitting in the minister’s office, the colleagues are talking about their plans, then my turn comes and I make up anything: ‘Minister, I have an idea which is, unfortunately, not easy. I’ve seen a Japanese animation with a whole bunch of protagonists; we constantly see somebody new there. I would like to make a similar film’. And on the next day, Kawalerowicz calls me: ‘Your film script is approved’. ‘What film?,’ I ask. ‘There is no script at all!’ In a moment, I am informed that the money is there, the film has been directed for production. What was I supposed to do? I looked through my draft notes made for years, sat up a few nights and knocked something together. I was heading for the filmset almost with tears in my eyes. I hoped the editor would save me.”

The Digital Film Repository draws attention to the special screening of the most famous Polish film in the world, that is “Knife in the Water” by Roman Polański . As of today, it is the only Polish film reconstructed in the 4K resolution. The film screening will be held on Wednesday, 16th September, at 10.00 a.m. as part of a very interesting event: acting workshops entitled “How They Act”, prepared and held by the actress Małgorzata Potocka.

The choice of such a high resolution was determined by the character of Polański’s film. “Knife in the Water” in 4K is a film with a remarkable quantity of details. The resolution, 4 times higher than the currently used cinema 2K resolution – over 9,7 M pixels – allows for bringing out the smallest detail of the image. Hence, we will easily see face wrinkles or single hair waving in the wind while the actors are sailing by boat. Until now, all this could be seen in the camera lens only during the proces of filmmaking. “On account of such a high, unique image resolution, the digital reconstruction process required the most technologically advanced tools and graphic stations. It was due to those additional technical requirements that but a few films in the world are reconstructed in the 4K resolution each year,” explains Łukasz Rutkowski from ReKino, a company that is responsible for the image digital reconstruction of Polański’s Oscar-nominated masterpiece.

As part of the workshops with Malgorzata Potocka, the viewers will also be able to remind themselves of another Polish film, also an Oscar-nominee – “The Maids of Wilko” (Friday, 17th September, 10.00 a.m.). The 2012 premiere of the digital version of the film was a great Festival event. “The Maids of Wilko” is one of the numerous Polish films which have been renewed within the pioneer digitization and reconstruction project of KinoRP.

The restored masterpiece of Wojciech Jerzy Has, “How to Be Loved”, will become a pretext for a meeting with the priest Andrzej Luter, the author of the book “Kino wiecznie młode “, which will be presented during the Festival. The film screening will be held on Friday, 18th September 2015, at 1.00 p.m. in the Gdynia Film Centre, and the meeting with the author will be held an hour earlier, at 12.00, in the Gdynia Film Centre Gallery.

The films restored will also reach open air screenings. The Digital Film Repository invites to an unusual, well-known film by Piotr Szulkin entitled “O-Bi, O-Ba. End of Civilization”. The screening will be an open air event held at Plac Grunwaldzki on 17th September at 8.30 p.m.

Let is remind that besides “I Hate Mondays”, six other digitally reconstructed full-length feature films will be shown within the Pure Classics section. “Story of Sin” by Walerian Borowczyk will be shown on Tuesday, 15th September at 4.00 p.m.; after that, at 7.15 p.m., “Nightmares” by Wojciech Marczewski; on Wednesday, 16th September, at 6.30 p.m., “Lesson of the Dead Language” by Janusz Majewski and on Thursday, 17th September, at 3.30 p.m., “Hospital of the Transfiguration” by Edward Żebrowski. All the screenings will be held in the Gdynia Film Centre.

And in the Gdynia Waterfront Centre Multikino, the In memoriam cycle screenings of the Pure Classics section will be held. On Tuesday, 15th September, at 1.30 p.m., the viewers will see “The Shout” by Barbara Sass-Zdort, and on 16th September, at 4.00 p.m., “My Nikifor” by Krzysztof Krauze. It is worth emphasising that both this film and the already mentioned “The Maids of Wilko” have been reconstructed thanks to the patronage of PKO BP which has been engaged in the restoring of the splendour of the Polish films. It is also the sponsor of the Gdynia Film Festival.

The last screening will be accompanied by a short-length film by Krzysztof Krauze entitled “Deklinacja”, made available by Studio Miniatur Filmowych.