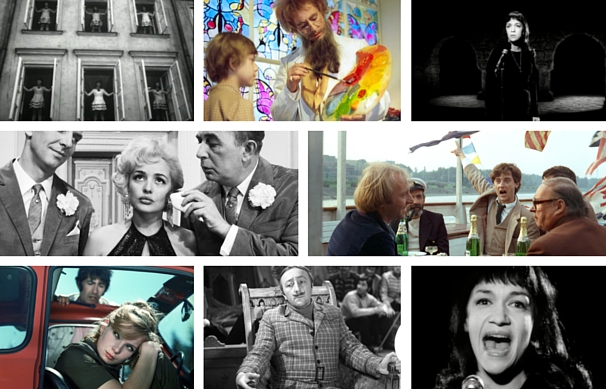 A fourth edition of reviews of Polish genre films organised by TVP
Kultura and Gdynia Film Festival. The audience of the 41st Gdynia Film
Festival will see four Polish musical films: “Heat” by Kazimierz Kutz,
“A Million for Laura” by Hieronim Przybyła, “The Big Picnic” by
Krzysztof Rogulski and “Academy of Mr. Kleks” by Krzysztof Gradowski.

A review of four emblem Polish musical films will be supplemented
with a review of television short and medium length musical forms from
the late 60s (presented also on TVP Kultura), which are unbelievably
interesting from the point of view of the film technique of the
prototypes of the video clips of today. These are the films made by the
greatest choreographers, costume designers and operators of the Polish
cinema.

The Polish musical cinema may take pride in a
fairly extensive list of titles. The very first Polish post-war film
“Forbidden Songs” (the pun in the title of the section was included on
purpose) was in fact a musical film. The film by Leonard Buczkowski
evolved to this form from initially a simple documentary idea to save
from oblivion the insurgent songs of the destroyed Warsaw, without
penetrating the historical twists of the beginnings of Polish post-war
cinema. It is fair to say that the “Forbidden Songs” became the first
and most important film hit after World War II. In the following years,
there were more musical films, mainly due to Janusz Rzeszewski and Jerzy
Zarzycki: the first one was the author of as many as four titles,
including such popular titles as “Hallo szpicbródka, czyli ostatni
występ króla kasiarzy”, “Miłość ci wszystko wybaczy”, “Lata dwudzieste,
lata trzydzieste” (these four are complemented by the less successful
film “Special Mission”). Zarzycki won the hearts of the Polish audience
reaching for the work of the prewar vaudeville in the movie “The Soldier
of the Queen of Madagascar;” he is also the author of another musical
film, “Klub kawalerów.”

In the recent years, the
Polish musical cinema is going through a renaissance, to mention even
such titles as “The Lure” by Agnieszka Smoczyńska or “#Wszystko gra” by
Agnieszka Glińska. Hence the decision of the Artistic Director Michał
Oleszczyk to include the films presenting this particular genre in the
programme of the Festival. “I think that we all increasingly feel that musical films are on the rise in Poland,” says Oleszczyk. “Two
years ago, “Polish Shit” triumphed in the Visions Apart Competition,
and this year, music plays a particularly strong role in the Main
Competition entry, “All Those Sleepless Nights” by Michał Marczak, which
even sports an idosyncratic dance number. I am glad that in Gdynia, we
will remind the audience how Polish musical cinema looked and sounded in
the previous decades”.

“I composed the
overview “Forgotten Songs – Polish musical films” out of four films
showing different ideas on the use of the genre and different approaches
to musical form of the creators over the years,” says Tomasz Kolankiewicz from TVP Kultura, the initiator and curator of the section. “Starting
with the film “Heat” by Kazimierz Kutz, being an attempt at
transferring the extremely popular cabaret of Elderly Gentlemen by
Jeremy Przybora and Jerzy Wasowski to cinema screens, through the comedy
“Million for Laura” from the early 70s, full of skiffle music, the
brilliant “The Great Picnic” involving the Maanam band, to the
adaptation of “The Academy of Mr. Kleks” by Jan Brzechwa. Songs as
illustration and those which counterpoint the plot, the use of
animation, complex choreography… and all this against the background
of the changing Polish People’s Republic: the half-fairy-tale Warsaw of
the 60s, the capital and province of the early 70s, children’s home,
dark corners, dens and the Warsaw Central Station from the early 80s, to
the escape from the hopelessness of the mid-80s to the land of fairy
tales”.

The full length programme will be
supplemented by documentary short and medium length films, such as
„Kulig” (dir. Stanisław Kokesz), where Bogumił Kobiela is accompanied
by, among others, Skaldowie, Maryla Rodowicz, Alibabki; “Koncert na 707
ulic” (dir. Ryszard Pluciński), that is, an edited set of a couple of
video clips for the cult works of the bands of the 60s; “Ewa Demarczyk”
(dir. Jan Laskowski), a musical film with beautiful lighting presenting
the video clips of the most important works from the repertoire of the
great singer, recorded in the set decoration to the film “King Boleslaus
the Bold”.