Gdynia for Children at the 44th PFF 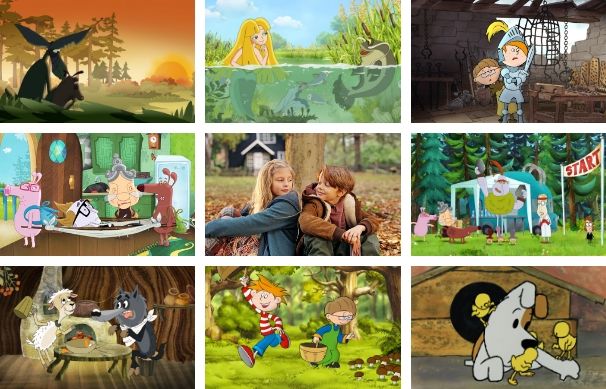 Organised by the Polish Filmmakers Association, in co-operation with the Pomeranian Film Foundation, Gdynia for Children is one of the oldest and most popular sections of the Polish Film Festival. This year’s 16th edition features the latest releases as well as all-time classics from – “Mami Fatale” and “The Day of Chocolate” to “Rex” and “Trip for one smile”.

Films for the young audience of the 44th PFF – 30 episodes of animated series and 11 full-length features – will screen at the Conference Center of the Pomeranian Science and Technology Park. Detailed schedule divided into age groups: kindergarten and early primary school, is available on the Festival website.

A journalist, film critic, and a member of the Polish Filmmakers Association, Jerzy Armata prepared a commentary to this year’s edition of the “Gdynia for Children – Masters and aprentices”.

Polish cinema for the young audience has had its ups and downs. One year, a shower of prestigious awards at important festivals and crowds teeming in screening rooms and in front of TVs, another – not so much. Only five years ago in our book Polish Film for Children and Teenagers, Anna Wróblewska and I were sceptical towards the future, looking back at the golden age of this branch of Polish cinema. But we saw the light at the end of the tunnel that sucked children’s cinema during the transformation. It wasn’t blinding, but it was there.

This situation, however, has changed and the sun is finally rising above children’s cinema, both features and animation, as proven by the Montreal International Children’s Film Festival award for innovation and originality for Jacek Piotr Bławut’s feature debut The Day of Chocolate, a stunning adaptation of Anna Onichimowska’s bestselling novel, or Tomasz Szafrański’s Rock’n’Roll Eddie awarded by children themselves at the festival in Rzeszow.

There has been a huge boom in animation as well, especially in the area of television series for children: Mami Fatale from Gdansk-based Grupa Smacznego, Jim and Screw from the Animated Movies Studio in Bielsko-Biala and Agatha from Warsaw-based Serafinski Studio, to name but a few. A special mention goes to a long-running cycle, Polish Fairy Tales, created by the Poznan-based TV Studio of Animation Films, in which well-known stories are given a new and immensely attractive auteurial twist.

Years ago, Polish animation for children turned out to be a real goldmine. Not only did it win numerous trophies at prestigious festivals but also promoted Polish film abroad. Episodes of the most popular TV series, about the adventures of Bolek and Lolek, were sold to over 80 countries on every continent. This success was repeated by Rex, a dog created in the 1960s by Lechosław Marszałek from the Animated Film Studio. Some digitally restored episodes of the show will screen in this year’s Gdynia for Children.

The achievements of prominent animators, such as Lechosław Marszałek, Władysław Nehrebecki – Bolek and Lolek’s “father”, Tadeusz Wilkosz – the master of puppet animation, Witold Giersz – the author of a spectacular adaptation of Ludwik Jerzy Kern’s “Please, Mr. Elephant” and many other fantastic “living paintings”, and Zofia Ołdak – the owner of “The Chequered Pup” beloved by children, could only be matched in feature film, in terms of both popularity and festival acclaim, by magnificent films of Maria Kaniewska, Krzysztof Gradowski, Kazimierz Tarnas, Janusz Łęski, Wiktor Skrzynecki, and Stanisław Jędryka, who passed away a few months ago.

Paying tribute to the late director, Andrzej Jasiewicz, Chairperson of the Polish Filmmakers Association Children’s Film Section, confessed that: Stanisław Jędryka’s films were something of the third pillar of education, perfectly supplementing school and family in the process of raising a child. He himself was diminishing this “didactic” valour of his works claiming that he only wanted to tell captivating stories about children characters. It gave him a lot of joy that, though black and white and old, his films stay alive. They do. Universal and timeless just like the legacy of Kaniewska, Nasfeter, Nehrebecki, Marszałek, Serafiński, Gałysz…

Gdynia for Children is co-financed by the Polish Film Institute. UNICEF Poland – a humanitarian organisation working for children – is the Honorary Patron.