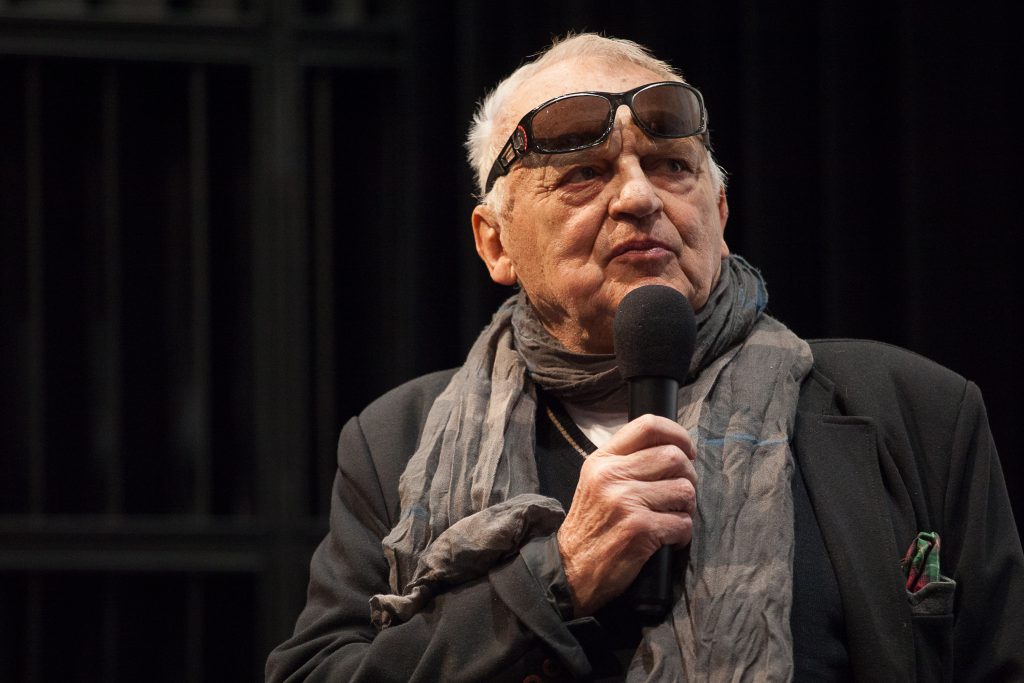 On 23rd September 2017, during the Closing Gala of the 42nd Polish Film Festival in Gdynia, the Platinum Lions will go to a Polish director and film, television and theatre screenwriter, Jerzy Gruza.

The Platinum Lions are awarded by the Organizing Committee of the Festival as acknowledgement for the entirety of artistic work of the prizewinner, who is recommended by the Programme Council in agreement with the Polish Filmmakers Association. The outstanding filmmakers honoured with the Platinum Lions include: Andrzej Wajda, Jerzy Antczak, Sylwester Chęciński, Tadeusz Chmielewski, Tadeusz Konwicki, Roman Polański, Witold Sobociński. Last year, the award was given to Janusz Majewski.

Jerzy Gruza is a director and film, television and theatre screenwriter, an actor. He was born in 1932 in Warsaw. He graduated from the Faculty of Directing at the Łódź Film School in 1985, already as an author of iconic Polish television series, popular up to today, and of a few dozen of appreciated film and theatre works. For almost 30 years – from mid 50.’s to the beginning of the 80.’s – he was related to the Polish Television, for which he used to prepare Theatre of Television plays – among others, “L’Avare” (1965), “The Visit” (1971), “Romeo and Juliet” (1974), “Revisor” (1977), “Antigoni” (1980) – as well as numerous programmes and entertainment and musical performances.

“Jerzy Gruza should have been honoured with these Lions a long time ago. For many reasons: for his films, series, hundreds of TV programmes, theatre plays, for his innovative language that he has introduced into the Polish television. For the kind but ironic, often scoffing description of our reality,” says Wojciech Marczewski, the Chairman of the Programme Council of the Polish Film Festival. “Everyone can choose their own reason. Me too. I award my private Platinum Lions to Jerzy Gruza for the making of two Theatres of Television: ‘Mieszczanin Szlachcicem’ with Bogumił Kobiela and ‘Revisor’ with Tadeusz Łomnicki. Both outstanding and memorable!,” Wojciech Marczewski adds.

“Wojna domowa” made by Jerzy Gruza in mid 60.’s, despite the flow of years, remains one of the most popular Polish comedy series. Its success can be contributed also to great creations of actors of the older generation, the stars of the Polish stage: Alina Janowska, Irena Kwiatkowska, Kazimierz Rudzki, Andrzej Szczepkowski, Jarema Stępowski.

The 70.’s is the time of “40-latek”, with the memorable roles by Irena Kwiatkowska, Anna Seniuk and Andrzej Kopiczyński. Jerzy Gruza has not only recreated the gallery of immortal protagonists loved by the viewers but he has also portrayed, in a perceptive and witty manner, the Polish reality. In the 90.’s, the director returned to the story of the Karwowscy family in a television continuation: “40-latek. 20 lat później”. At the turn of centuries, in 1999 and 2003, Jerzy Gruza made another series project, “The Tigers of Europe”, recreating the satirical image of Poles facing a new reality in the country after systemic and economic transformation.

In 1983, Jerzy Gruza moved – professionally and personally – to Gdynia, where for 8 years, he managed the crew of the Danuta Baduszkowa Musical Theatre. His “golden years” fall into this period of his cooperation with the Gdynia stage. It was opened with the premiere of “Fiddler on the Roof” (1984), presented in Poland for the first time, 20 years from its New York premiere. The play was enormously successful not only in Gdynia but also in the whole of Poland and abroad, winning the audience during numerous tournées of the Gdynia cast. The following years were another famous musical premieres: “My Fair Lady” (1986), “Jesus Christ Superstar” (1987), “Les Miserables” (1989), “Człowiek z la Manchy” (1991) and “Żołnierz Królowej Madagaskaru” (1991).

Receiving the Platinum Lions during the Closing Gala of the 42nd Polish Film Festival, Jerzy Gruza will stand again at the stage of the Gdynia Musical Theatre, to which the greatest successes of his career are bonded. To a man of television and film that Jerzy Gruza has been from the beginning of his professional path, it is theatre that has become a space unusually vulnerable to his directing concepts and drive of the making.

Jerzy Gruza is the prizewinner of, among others, SuperWiktor’93 for the entirety of television work and the holder of the title of the “Star of the Polish Television”, granted to him on occasion of the 50th anniversary of TVP “for making original film, theatre and entertainment forms”.