The Film Criticism Master Course at the 40th GFF! 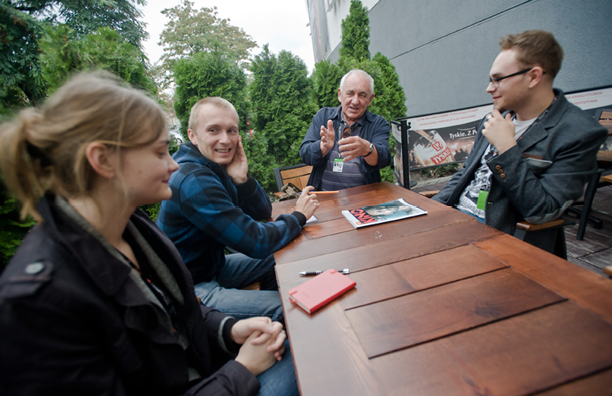 One of the accompanying events of the 40th Gdynia Film Festival is the Film Criticism Master Course organized by the Munk Studio – Polish Filmmakers Association together with the KINO monthly and the Gdynia Film School. We present the programme of the workshops which will be held by editor Bożena Janicka and the lecturers of the Gdynia Film School.

The Film Criticism Master Course will be attended by the winners of the “Course for Reviews” competition which ends on 7th August. There is a lot at stake as this year’s FCMC involves professional journalism workshops during which the participants will get acquainted not only with the theory but also with the practice of the film critic’s profession. The FCMC programme consists of two parts – literary workshops held by editor Bożena Janicka and television workshops prepared by the Gdynia Film School lecturers.

The Gdynia Film Criticism Master Course will begin with the literary workshops, planned for two days and comprised of four meetings reconciling theoretical lectures with practical interjections. The first meeting will be devoted to the editing of a magazine, based on the Kino monthly example. The next two meetings will concern the art of interviewing and reviewing. The last meeting will be devoted to the individual discussion of the participants’ competition submissions.

The television workshops, lasting three days, will include a critical analysis of the film materials that are available in the net; the preparation to a speech in front of the camera with regard to preparing the text, costumes and make-up; the discussion of the elementary materials for the needs of television and the Internet (the interview or the discussion as well as the individual performance); the tricks of the trade of working in front of the camera.

The Film Criticism Master Course will be settled based on the workshop tasks assigned by the hosts and executed by the participants (a literary one and a television one). The FCMC settlement will at the same time be the settlement of the whole competition, where the following awards are involved: the Main Prize in the amount of PLN 1500 and Distinctions amounting to PLN 750 each.

We kindly remind to all those who are interested in the Film Criticism Master Course that the competition „Course for Reviews”, which is the basis for being qualified to participate in the FCMC, lasts until 7th August. By that time, the competition submissions shall be sent: two reviews. The first one, up to 1500 characters long, should concern any Polish film the premiere of which took place in the years 2014-2015. The second review, of the length of between 3000 and 5000 characters, should include a comprehensive analysis of Maciej Bochniak’s film entitled “Disco Polo”.

The rules and regulations of the competition, detailed information and the programme of the Film Criticism Master Course are available at the competition website: http://www.studiomunka.pl/KursZaRecenzje.

The Film Criticism Master Course in return for reviews, that is the „Course for Reviews”, is co-funded by the Polish Film Institute as part of the “Education and popularisation of the film culture” Operational Programme.