Wednesday at the 46th PFF 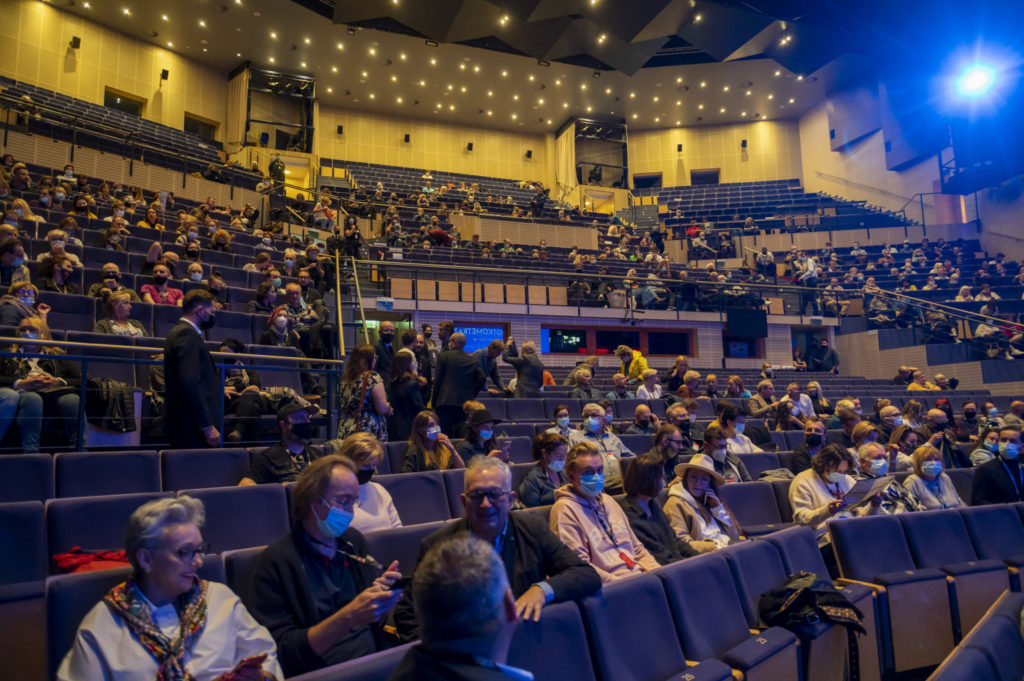 Andrzej Żuławski and his cinematography constitute the subject of several events scheduled for Wednesday, 22nd September 2021 – the third day of the Polish Film Festival in Gdynia. The agenda features meetings with the creators of short and microbudget films. The press screenings of the main competition films will cross the halfway mark and an important debate on the ethics in cinematography will take place as part of the Gdynia Industry.

Return to Legoland directed by Konrad Aksinowicz, Leave no Traces by Jan P. Matuszyński, Mosquito State by Filip Jan Rymsza and The Getaway King by Mateusz Rakowicz – Wednesday at the 46th Polish Film Festival will offer as many as four press screenings of the Main Competition films. The film crews will meet the press representatives after each screening in the Warszawa screening room at the Gdynia Film Centre. The creators will also be present at the official screenings on the Big Stage in the Musical Theatre and will participate in meetings with the audience after selected screenings at the Helios Cinema in the Riviera Shopping Centre.

Also on Wednesday the first meeting with the creators of Songs about Love directed by Tomasz Habowski, participating in the Microbudget Film Competition takes place. The screening starts at 7:00 p.m. on the New Stage of the Musical Theatre.

The same venue hosts the presentations of the films from the Short Film Competition. They start at 10:00 a.m. and will be presented in clusters combined with meetings with the filmmakers.

A making-of documentary presenting the legendary Polish film, On the Silver Globe screening and a specially dedicated concert in the evening – Wednesday at the Festival may be almost entirely devoted to the cinema of Andrzej Żuławski. The screening of his digitally remastered film is scheduled for 7:00 p.m. in the Goplana screening room at the Gdynia Film Centre. Earlier, at the same venue a documentary by Kuba Mikurda entitled Escape to the Silver Globe will be screened. At 9 p.m. on the patio, visitors will have a chance to listen to the music from this film performed live by Stefan Wesołowski.

A documentary about the heritage of Kashubians and inhabitants of Tricity, Touching the Icon, directed by Olga Blumczyńska and Barbara Ostrowska is on Wednesday’s agenda of the Films from Gdynia non-competitive section. The main character, an ethnographer born in the Kashubian district, comes back to her homeland to focus on folk religious rites. The film was created as part of the scientific project entitled Kashubian Bows to the Feretrons, executed by the Ethnographic Division of the National Museum in Gdansk, who are the producers. The screening is scheduled for 6 p.m. at the Helios Cinema.

What is the current situation at the Polish film and theatre schools and on film sets in terms of relations among all participants of the educational and creative processes, with particular focus on the master – student and director – film crew members relations? Which best practices and solutions have been developed in this field over the recent months? On Wednesday, representatives of the film industry and press are welcome to participate in a debate on ethics, which will include some examples of anti-discrimination activities undertaken abroad. The detailed programme of the Festival’s third day is available here.

Usłysz kulturę (Hear the Culture) is Audioteka’s original programme which supports screenwriters, directors, and reporters in financing and creating their own audio productions. During the 46th Polish Film Festival, Audioteka has prepared a workshop entitled From Audioseries to the World of Cinema. The meeting will be moderated by Aleksandra Dąbrowska – the production manager and Arkadiusz Seidler – Publishing Director and Board Member. The meeting starts at 6:00 p.m. on the Chamber Stage at the Musical Theatre. It is important to underscore, that Audioteka is the Official Partner of the Festival concerts on the pation of the Gdynia Film Center.

Wednesday at the Festival also hosts the Award Ceremony of the Polish Society for Film and Media Studies.

The Jury decided that the Book of the Year Award goes ex aequo to Dawid Głownia for Początki kina w Japonii na tle przemian społeczno-politycznych kraju [The beginnings of cinema in Japan on the backdrop of the country’s socio-political transformations] and Urszula Biel for Kultura filmowa prowincji górnośląskiej: kina, właściciele, widzowie [Film culture of the Upper Silesian province: cinemas, owners, viewers]. The Debut of the Year Award goes to Przeczucie końca: modernizm, późność i polskie kino [A sense of the end: modernism, lateness and Polish cinema] by Miłosz Stelmach.

The Award Ceremony starts at 4 p.m. on the Chamber Scene at the Musical Theatre.

Visitors are also welcome to participate in the official publishing promotional event devoted to the latest edition of the Kompendium Produkcji Filmu Fabularnego [Feature Film Production Compendium]. The meeting with the authors of the third volume about the distribution, the fourth volume about the Copyright and the fifth volume about the duties in film crews – Marta Nowakowska and Michał J. Zabłocki will take place on the Riviera stage on the 22nd September at 12:00 p.m.