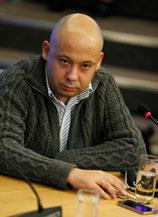 Born in 1976. One of the most renowned Russian directors of the new generation. His debut, The Last Train, was awarded in Venice, Rotterdam and Thessaloniki. His second film, Garpastum, premiered in Venice in 2005 and received Nika Award for Best Director. His next feature, Paper Soldier, won the Silver Lion for Best Director and the Award for Best Cinematography in Venice in 2008. In 2015, Under Electric Clouds received the Silver Bear for Outstanding Artistic Contribution at the Berlinale and the Asia Pacific Screen Award for Achievement in Directing.