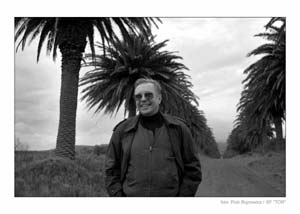 Film director and screenwriter. Born in 1939 in Warsaw. He studied physics at the University of Warsaw (1955-59) and philosophy at the Jagiellonian University (1959-62). He graduated from Directing at the Film School in Łódź in 1966. Since 1980, an artistic director of the TOR Film Unit and later the President of the TOR Film Studio. In the years 1971-83 he was the Vice-President of the Polish Filmmakers Association, and in the years 1975-77 – the President of the Board of the Polish Federation of Film Discussion Clubs. In the years 1987-2002 he was the member of the Cinematography Committee. Lecturer at a number of film schools, including the Film School in Łódź and the National Film School in the United Kingdom. He has directed operas and theatre performances in Poland, Germany, Switzerland, Italy, France and Russia. In 1990 he was elected the President of the Federation of European Film Directors (FERA). Consultant to the Pontifical Commission on Culture in the Vatican; former Vice-Chairman of the National Broadcasting Council of Poland. He was also the President of the EUROVISIONI Association. Professor at the University of Silesia in Katowice. Member of the Polish PEN Club and the Writers Association. Member of the European Film Academy and the Pontifical Academy of Fine Arts and Letters of the Virtuosi al Pantheon. Author of several books, including “Pora umierać”, “Między jarmarkiem a salonem”.
He has won many film awards in Poland and abroad.