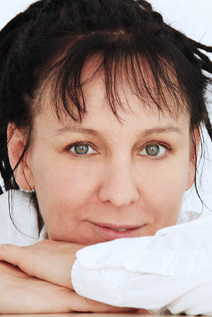 Writer. Graduate of Psychology at the University of Warsaw.
Author of novels, among others “Primeval and other times” (1996), “House of Day, House of Night” (1998), “Runners” (2007), “Drive Your Plow Over the Bones of the Dead” (2009), volumes of short stories, among others “Playing on many drums” (2001). Her articles and essays were published among others in “Nowy Nurt”, “Ex-libris”, “Polityka”, “Krytyka Polityczna”. Winner of the Kościelski Award (1997) and the “Polityka” Passport Award (1997). She received the reader prize of the Nike Award four times. Winner of the literary Nike Award in 2008 for her novel “Runners”. For “House of Day, House of Night” she received the prestigious Brücke Berlin Preis (2002) and she was shortlisted for the International IMPAC Dublin Literary Award (2004). Her books were translated into all European languages and also into Japanese, Chinese, Korean and Hindi. Some of her works were also staged in theatre, among others “Primeval and other times” twice (directed by S. Majewski and P. Tomaszuk), “E.E.” (Television Theatre play directed by Maria Zmarz-Koczanowicz), and adapted for the cinema: “Zhoorek”, dir. Ryszard Brylski, “Aria Diva”, dir. Agnieszka Smoczyńska.