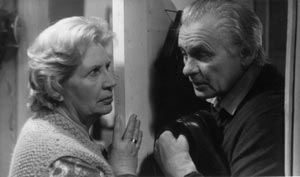 30-year-old Adaś spends the evening with his parents he hasn’t seen for a long time. Gathered around the table, they talk about strange things and interrupt one another. All of them are mean and answer automatically as if observing a certain ritual. When Adaś wakes up the following day, he finds his sister-in-law unconscious. The mother reminds him that his father died a long time ago. Is it possible that the last night was only a work of his imagination?