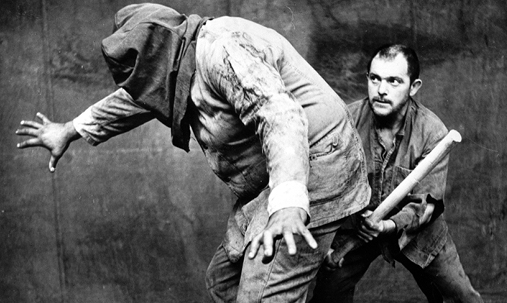 Grozo, a petty thief works his way up the absurd hierarchy of Goto,
an archipelago cut off from civilization by a tumultuous earthquake. Amongst
his menial tasks are cleaning the governor’s boots, attending to the dogs and
catching flies. What keeps him going is the dream of possessing Glossia (Ligia
Branice-Borowczyk), a stifled beauty trapped in a loveless marriage to the melancholic
dictator (Pierre Brasseur). Stunningly designed, Goto, Island of Love is
a film in which bizarre props, atmospheric sets and (most importantly) animals,
are given as much weight on screen as the human actors. Banned in Communist
Poland and Franco’s Spain, Goto, Island of Love is arguably Borowczyk’s most original
film. Features surrealistic sights, poetic flashes of colour and the stunning
use of Händel’s organ concerto.