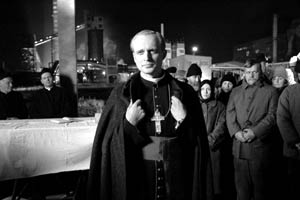 Year 1939. German troops invade Poland. Karol, a student of the Jagiellonian University, witnesses the arrestment of his professors and brutal breaching of the nation’s right to keep its identity. He decides to refrain from armed struggle and sacrifices himself to save the spiritual heritage of the nation instead. Karol loses the people he loves: his father, friends and mates. In this evil world, he tries to bear witness to human and religious values based on the doctrine of the Church. He becomes a priest. The film shows the future pope: a man gifted with charisma and sensitive to human suffering. The shooting started at the end of John Paul II’s life. The film had its premiere after his death.