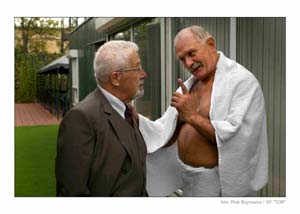 Wiktor, Polish ambassador in Uruguay, is painfully struggling with the death of his wife. After coming back to Poland, he meets Oleg, Russian Deputy Foreign Minister, a friend from twenty years ago when he himself was an underground activist and Oleg made his first steps in Polish Soviet diplomacy. Their friendship is scarred with two suspicions, though. Wiktor presumes that Oleg was infiltrating Polish underground and was his wife’s lover.