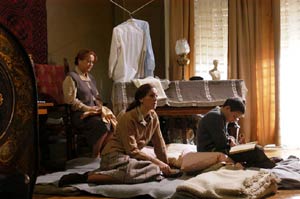 THE UNBURIED MAN. THE DIARY OF IMRE NAGY

The film was based on the archive documents, protocols and memories of witnesses. All the characters, except for Imre Nagy and his wife, are fictional. In 1956, Hungarian Prime Minister Imre Nagy objected to the Soviet Union and withdrew Hungary from the Warsaw Pact announcing its neutrality. After the uprising pacification, the new, pro-Soviet Hungarian government accused him of treason and sentenced to death in 1958. The account of the last two years of Nagy’s life primarily attempts to investigate the mind of a man unlawfully imprisoned.