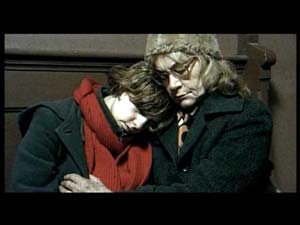 About the film: “Sometimes you stand on a station, even though the wait is over […].” The film tells the story about five people who accidentally meet on a provincial railway station. Almost all of them await the same: a train and a new life out of town. But they differ more that it seems and none can communicate with the others. Almost every conversation breaks off. Even a professor can’t talk to a student. The only effective conversation, in spite of intellectual differences, happens between a chav and a student and that’s thanks to a drug. That’s how we act. We can’t communicate with each other. We can’t, or even don’t want to, give a hand to somebody else and, sadly, to ourselves. Among the waiting passengers, there is a girl who never speaks a word. Others unknowingly touch her internal life. Sometimes she seems surreal which even emphasizes and explains the symbols and metaphors used in the film. The train, upcoming at last, won’t stop. It’s like a history rushing in front of those who can’t get on paralyzed by inertia. They come back to the station to wait, though, the situation gets worse and worse and slowly starts to look like waiting for Beckettian Godot. The message of the film touches upon a problem to which we all can relate. Very often people stay in relationships, pacts or places that bring nothing good and lead nowhere. Everyone around sees the situation we’re in and tries to persuade us that its hopeless. Yet afraid to make the first move, we wait for the outer power. That’s the thing with us, that’s the thing with the people who govern our disordered Poland wandering around the station and waiting for the train to the Better that never comes. I’d like to open the eyes of my audience, persuade them that if they stay as if in trance for too long on one station in their lives, they may wake up too late to catch their dreams.

Production: It has all started in the winter of 2004. Talking to close friends from different departments. Who would agree to work pro bono or for few zlotys for the next generations to have something that wouldn’t be a mainstream kitsch but touch their imagination. We made 500 kilometers in a small maluch in search for an appropriate abandoned station. There were supposed to be three days of shooting. We couldn’t afford more. Eventually, there were seven and we needed more money. Everyone went mad. After its editing, the film landed in a drawer. We couldn’t afford sound design. Month by month, we were losing faith for its completion. Luckily, in this highly conflicted crew, there were still a few people who had hope. And then, like an angel from the sky (Halleluiah!) we found a new producer. We moved on and 15th June 2005 “The Mirsk Station” was born.

The crew: Both the vision and sound were recorded in the analogue BETACAM system. After conversion to digital DV system, the film was edited in AVID. The shooting for “The Mirsk Station” took seven days in total: six days in February and one day in May of 2004. All interiors were shot in Łagiewniki (about 40 kilometers north from Wroclaw), all exteriors, both spring and summer, in Brochocin Trzebnicki (about 25 km north from Wroclaw). It took about 100 kilograms of heating coal, 200 teas with rum and 500 sandwiches to make it.