The Polish Film Institute, often called the Miracle of the Vistula, was established ten years ago. How did it come to that? What were the feelings of its creators and the filmmakers whose productions were made possible thanks to PFI? The authors of this film have a peek behind the scenes of the events of the past decade, which led Polish film art all the way to an Oscar. 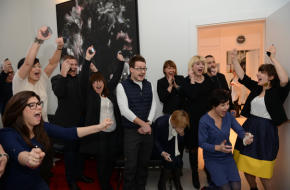 An obsessively jealous husband, his sexy wife-actress, a sneaky Hollywood director, a happy-go-lucky drug dealer, a girl and her beloved dog, a hot-dog vendor with a vague past, a frustrated student on a risky mission, a mountaineer cleaning hotel windows, an elderly painter, a crew of paramedics with an unusual problem and a group of hungry nuns. A cross-section of the inhabitants of a modern city whose lives and passions are intertwined. An unexpected chain of events will decide the fate of many of them in just eleven minutes. 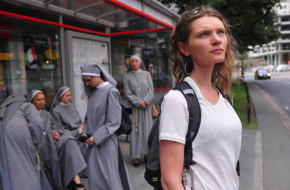 The film recounts the participation of Poles in the air battle between the German Luftwaffe and the British RAF, which took place from July to October 1940.

A story of three pilots from the No. 303 Polish Fighter Squadron - Witold Urbanowicz (the Polish squadron commander), Mirosław Feric (the half-Croatian chronicler of the unit) and John Kent (the British commander of Wing “A”, of Canadian origin).

The film uses archival materials from the National Archives in Washington, the Imperial War Museum and the Polish Institute and Sikorski Museum in London and also photos taken by Urbanowicz, Kent and other pilots. Computer simulations depicting air fights were made based on original sound recordings, Feric’s chronicles and his colleagues’ accounts. 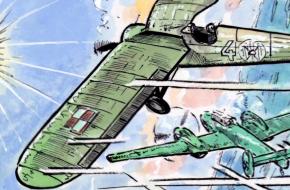 A Grain of Truth

A horrendous crime has been committed in Sandomierz. The naked body of a murdered woman, a well-liked social activist, is abandoned in a public place. The way she was killed brings to mind a ritual murder. The local policemen led by the recent star of the Warsaw Prosecutor’s Office, Teodor Szacki, will not only need to solve a criminal puzzle but also face the hysteria of the public opinion. 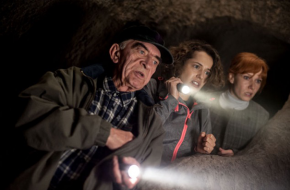 Ada that will never do

One of the best comedies of errors of the ‘30s. The film’s highlights are not only a first-rate cast and music hits, but above all the hilarious dialogues.
The title role is played by a brilliant character actress Loda Niemirzanka – after a series of bit-parts it is her first big role. She is accompanied by Aleksander Żabczyński and one of the best comedians (apart from Adolf Dymsza) Antoni Fertner.

The version presented in Gdynia was created by assembling three surviving incomplete copies of the film. Thanks to the process of digital restoration, the material is of a much higher image and sound quality and is nearly 9 minutes longer than the previously known version. 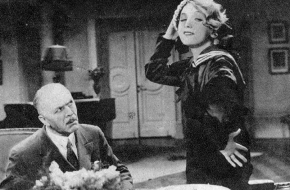 While her parents are out, Agatha goes up to the attic. There are lots of interesting things there. Agatha lifts the lid of an old coffer and, to her astonishment, releases Dust who escapes from the attic right away and starts to mess around in the whole house. He’s deaf to Agatha and Cyryl’s pleas for him to go back. Dust likes Agatha’s room the most and wreaks havoc among her things and books scattered around. He also goes to the parents’ room and dresses in her dad’s things. Finally, desperate, Agatha vacuums and tidies not only her room but every place where Dust made himself at home... 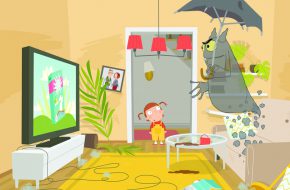 Mum reminds Agatha to wash her hands after planting flowers. Despite his protests, Agatha takes Cyryl with her to the bathroom. Suddelny Green Soap jumps out of Agatha’s hands and plunges into the washbasin. Agatha travels to Soapland with him and finds herself in the middle of a foam-beating and soap bubble contest. Agatha and Cyryl root for their friend and when Green Soap wants to withdraw from the competition because of one of the rival’s unsportsmanlike conduct, Agatha motivates him to go on and so Green Soap wins. In the real world Agatha voices no more protest when her mum asks her to always remember to wash her hands... 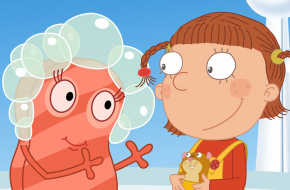 Agatha and the Cactus

Agatha keeps watering the cactus standing in her room, although Cyryl tells her that cacti don’t like to have too much water. There is a horse paddock made of chestnuts and plasticine standing on Agatha’s desk. Suddenly, she notices that the paddock is empty and the cactus is gone from the sill. She decides to look for the horses and she and Cyryl are transferred to the prairie. After many adventures she manages to find the horses locked up by Cactus in a train wagon. Once she promises not to water him all the time, the Cactus agrees to release the horses and all return home safe and sound. 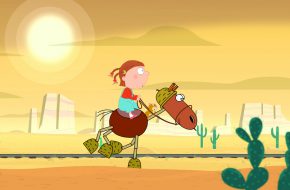